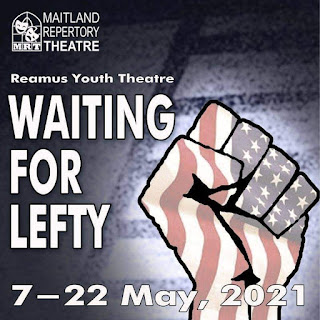 Reamus Youth Theatre features talent aged between 16 and 25. It aids in developing their skills in a wide range of theatre concepts.

The group meets once per week to extend their theatre skills through various workshops, rehearse performances, and have fun. They have performed a Shakespeare production annually since 2002 and also perform short play nights and play in a day productions.

Not only does Reamus provide a stage for young adults to perform, it also offers the opportunity to become involved in the technical side of theatre such as directing, lighting, sound, costumes, set designs, and makeup.

Scholarships have been offered to Reamus members to extend their theatre knowledge through external, professional workshops.

'Waiting For Lefty' is a play written by Clifford Odets and Directed by Joanne Lawler.

Written in 1935 amid the Great Depression, it captures a meeting of New York taxi drivers ready to strike. The corrupt union head does everything he can to discourage the decision to strike. As they wait for their leader Lefty Costello to arrive, members of the workers committee step forward to tell heart-wrenching tales of the conditions that have brought each of them individually to the point of no return.

With families they can't feed, a society fraught with injustice and no future in sight, they are determined to fight to the death for the right to live like a man in a world in which success is God.

It's a strike for a greater dignity, for a bolder humanity and for the full stature of man.

Director Joanne Lawler wrote that the usual annual Shakespeare play was replaced this year, due to the performance moving up to May instead of the usual August. "It was the perfect training ground for Reamus; a short but powerful drama steeped in real life events. All roles were of a similar size which meant all cast members could be equally challenged throughout the process. They would have the challenge of developing a New York accent, and it appealed to the many politically active/socially conscious members of the group".

'Waiting For Lefty' is currently playing at Maitland Repertory Theatre for 7 more shows: