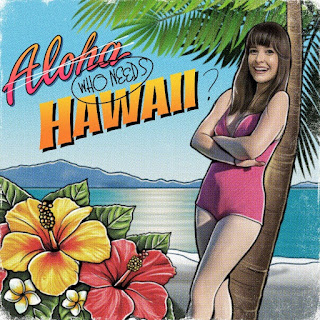 Following on from the success of her previous singles, Cass Hopetoun is back with a song born from pure escapism: 'Who Needs Hawaii'.

Hopetoun is relatively new on the music scene, but has already achieved success. Her love of music started from a young age, after a friend dragged her along to choir practice. From there, she began piano and vocal lessons. Through personal growth and exploration, Hopetoun found herself in the realm of Musical Theatre. It wasn't long before she transitioned to Country Music, the genre she sings so comfortably in now.

In March 2020, Hopetoun released her debut single 'Shots', co-written with her partner Blake Dantier and produced by Matt Fell at Love Hz Studios. 'Shots' reached #4 on the Australian Country Music Airplay Charts and has been streamed over 150 000 times on Spotify.

Her follow-up single 'Typical Bride' toppled Taylor Swift off the top spot of the Australian Country Airplay Charts. It stayed in the top 20 for 12 weeks. The song earned Hopetoun a Golden Guitar Nomination for 'New Talent of the Year' at the 2021 Tamworth Country Music Awards. She was voted 'Best New Songwriter' at the 2021 Tamworth Songwriter Association Awards.

A year later, 'Who Needs Hawaii' is set to follow with the same success. In 2020, the world was forced to slow down and change scenery, which is where Hopetoun drew inspiration. She says:

“This is definitely my COVID-19 song! With an international travel ban, I’m itching to get out of the country more than ever. I spent 2020 trying to make our house feel as much like a holiday destination as possible.”

Hopetoun and Dantier wrote the song after he'd been searching for ideas.

"He asked, ‘What’s going on in your life?’ And I believe I said, ‘I want to go on a holiday soooo bad’ and that’s where the inspiration came from.”

Accompanying the single is a music video which was directed by Lawrence Lim of Tribal Apes Productions. Hopetoun and Lim were the co-producers. Inspiration for the video stemmed from Hopetoun's creative eye.

“The video was shot in an AirBnB in the Blue Mountains in NSW. The concept is essentially staying true to the lyrics of the song – finding a positive in COVID living and recognising that you don’t need to head halfway across the world to have a good time. Plus, I really wanted to do a one shot take, where we use one continuous take for the whole video. No edits or cuts. We meshed these two ideas together.”

The flow of the one-take video fit the song to a tee.

“To make sure it felt fresh & original I wanted one continuous shot and keep a really quirky vibe… to take a dive at something different, where it wasn’t all about the glam and the glitz. To capture that chilled, fun vibe that the song has. My band mates came along for the day and we literally had the most relaxed day of shooting ever. The song is celebrating having a good time and I wanted to do this with a bunch of friends.”

'Who Needs Hawaii' is a salient reminder to everyone with busy lives to slow down and take a deep breath once in awhile. It is a reminder that we don't need to wait until we have time off to relax; that we need to take some 'me' every now and then.

'Who Needs Hawaii' is available to stream and download now.

Check out the video:

Hopetoun will be touring around NSW and QLD this year: