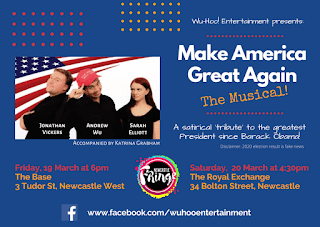 Wu-Hoo Entertainment is back with their production of Make America Great Again: The Musical. After being set to run during Newcastles Fringe Festival last year, it was cancelled due to the Covid-19 Pandemic. But now they are back for two exclusive shows in March.

The show is produced by Newcastle local Andrew Wu who stars alongside Jonathan Vickers and Sarah Elliot. Accompaniment is by Katrina Grabham.

The show is described as “A satirical tribute to the greatest President since Barack Obama”. It is a recount of Trump’s unexpected rise to Presidency and details all the controversies that has come with it.

Nothing is left off-limits. The show covers Trump’s impeachment; his meetings with North Korea and the Stormy Daniels scandal. This tongue-in-cheek show is all about the making of a propaganda musical to boost Trump’s popularity.

The story is played out through well-known pop songs and show tunes which have all been reworked to be relevant to the plot. There are songs from Lis Miserables, The Greatest Showman and Wicked to name a few.

The idea for the show came about in 2017 when Wu was studying his Diploma of Musical Theatre.

“When I was looking at the cabarets that were popular, I found that the scene was dominated by tribute shows. I decided to put a twist on the tribute show format by choosing an unworthy subject. At the time, Donald Trump had just won the election, so the pieces fell into place”.

Make America Great Again is a show that can be enjoyed by all, however it does come with an age recommendation due to coarse language and adult themes.

Make America Great Again will debut at the following shows: