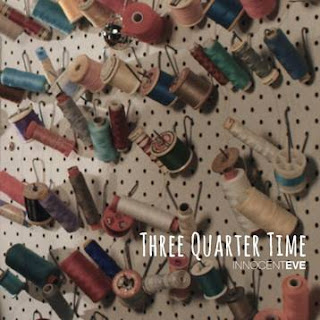 QLD sibling duo Innocent Eve (Bec and Rachel Olsson) are starting 2021 off with a brand new single 'Three Quarter Time'. It is a relatable song for many of us, having faced tough lockdown and restrictions. It follows on from the success of 'Mixed Bag', which debuted at #3 on the AMRAP Regional Airplay Charts. 'Viking' spent 20 weeks in the 2TM Top 20, including one at the top spot.

In 2015, they released their debut album 'Temporary Balms'. It received critical acclaim and notable airtime across the country, placing in the CMC Top 40. Since then, Innocent Eve have worked exclusively with ARIA and Golden Guitar award winning producer Matt Fell. In 2016, they released an EP 'True North'.

Innocent Eve have a string of live performances under their belt. In 2017 they performed at the Bluebird Cafe in Nashville as part of the Australian showcase at Americanafest. They have also performed at legendary Australian events such as the Gympie Muster, Birdsville Big Red Bash and were the ambassadors for Airlie Beach Festival of Music in 2019. They were also guest artists of Luke O'Shea at the Songhouse Sessions in 2020, and have supported the likes of Shannon Noll and Casey Barnes.

Bec was diagnosed with cancer in 2020. Due to this and COVID, the duo have had their touring life cut short temporarily but will be playing a select few shows throughout Feb and April.

The song can be described as "a heartfelt reflection on loneliness and the challenges of life". It is not about football; rather a reference to a style of dance known as 'The Waltz'

Of the song, Bec says:

“I wrote this song during a lonely time in my life, after moving a long way from my family and friends. I suppose ‘Three Quarter Time’ is a cry for help, about wanting someone to take my loneliness away. I had an aching for connection during a long, self-imposed solitude, but at the same time I was so afraid to connect with anyone.”

It was produced by Matt Fell at his Love HZ Studios in Sydney. The accompanying video was shot by Duncan Coombes of The Filmery. The setting for the video is a sewing room belonging to the Gosford Musical Society. Bec says:

"The costume creation room was the perfect setting to conjure up a melancholy scene for a solitary seamstress to pour her loneliness into sewing a dress for an upcoming event. With the haunting and beautiful mannequin as her muse and eventual dance partner, the lonely seamstress chooses her solitude over the outside world once more.”

Music has brought the duo even closer during this tough time. Since Bec's cancer diagnosis they have been bound together through music. As the single released, Bec went in for another round of radiation. Rachel says:

“We just want to move forward and share our music. There’s no such thing as a perfect time, and with the uncertainty around Bec’s cancer, we just want to get it out into the world.”