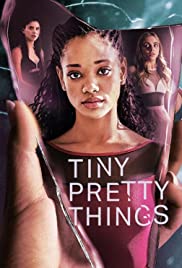 Don’t let the name fool you, Tiny Pretty Things is far from tiny or pretty. If you thought ballet was all tutu’s, tiara’s, and twirls then you need to think again. From the get-go, the Netflix original series Tiny Pretty Things invites us into the ugly American world of professional dancers and how some dancers would do literally anything for their chance at the spotlight.

The story follows Neveah (Kylie Jefferson), a newcomer at the Chicago-based Archer School of Ballet. After star student Cassie (Anna Maice) falls from the roof ending up in a come, Neveah is granted a scholarship.

Casimere Jollette stars as Bette Whitlaw, a talented dancer who is living in her sister’s shadow and is plagued with an injury that threatens to end her career. Bette will stop at nothing to get what she wants, even if it means sabotaging her fellow dancers.

Madame Dubois (Lauren Holly) is the typical director- an ex-dancer who will do anything to make sure her school is the best. She thinks she has the student’s best interest at heart but as the story unfolds, dangerous secrets about Madame Dubois are revealed.

Barton Cowperwaithe stars as Oren Lennox, a troubled dancer who is battling with an eating disorder. He is troubled by his sexuality. Although he is in a serious relationship with Bette, he finds comfort with his roommate Shane (Brennan Clost) by engaging in meaningless sex.

Daniela Norman plays June Park, a talented dancer who is placed in the shadows, much to her mum’s dismay. She hopes to get a principal role so that her mum won’t force her to leave the school. Along the way, she gets tangled in one of Madame DuBois’s schemes and fights Bette for a role.

Then there’s the sleazy yet brilliant choreographer Ramon Costa (Bayardo De Murguia) who’s idea of the next hit ballet is having teenagers portray the story of serial killer ‘Jack the Ripper’. He is in a relationship with Delia Whitlaw (Tory Trowbridge), Bette’s older sister who is now principal with the Archer company.

As Isabel Cruz (Jess Salgeuiro) further investigates Cassie’s ‘fall’, she realises that many of these dancers have things to hide. Better yet, aside from Neveah, they all have motive for pushing Cassie. But did she simply just fall in a tragic accident? You’ll have to wait to the end of the series to find out.

Having danced since the age of 3, I like to think I know a thing or two about how cut-throat the world of ballet can be. It’s definitely catty, competitive, physically and mentally demanding. I certainly never experienced anything close to what is portrayed in Tiny Pretty Things. Then again, the American world of dance is vastly different to ours here is Aus.

Nevertheless, the show had me absolutely hooked. The dancing aspect was brilliant, with each character having a different style and place within the show. The choreography is unique, highly polished and captivating; especially during the scenes performing ‘Ripper’.

The scandals add an interesting twist to the show. Things were never really as they seemed, keeping me interested and compelled to binge.

While it isn’t quite as W.T.F as ‘Black Swan’, it is pretty drastic. Take for instance Bette. She is suffering from a major stress fracture in her foot. Rather than take the time out to heal, she finds herself becoming addicted to pain meds.

Then there’s the many scandals involving Madame DuBois. Her relationship with student Caleb (Damon J. Gillespie) is all sorts of wrong but is unsurprising given the trend these sorts of shows follow.

It seems that when they aren’t dancing, the dancers are mostly thinking about who they can hook up with. How is it possible that so few of them actually get caught given that they live at the school under constant supervision?

They may have panned the show, but don’t listen to the critics. Sure, the explicit scenes may be too much for some and the scandals may be too plenty; but overall Tiny Pretty Things is a really entertaining show. There’s a heavy focus on ballet as there should be and, in my opinion, a healthy balance of everything else.

Netflix have not confirmed whether the show would be back for a follow-up season. After a massive cliff-hanger at the end of the season, it would be cruel if they don’t!

Check out the trailer for Tiny Pretty Things here