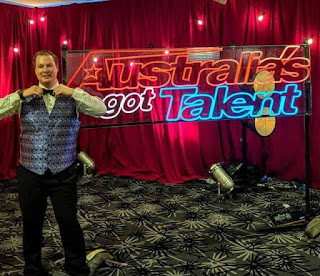 Scott Stunz is an Adelaide based magician who has appeared on Australia's Got Talent. Like many other perfomers, Covid-19 hit him hard.

How would you describe your work to those who haven’t seen it and how long have you been performing?

I am a comedy magician who performs both stage shows and close up magic.  I have performed at both family events through to corporate events right across Australia.
My style is comedy magic. Most people think that I just tell jokes and do magic, however I incorporate humour into the routine. The humour is very clean and often times making fun of me rather than the audience.

What has been on of your most memorable experiences performing?

Wow, where do I begin?

So much has happened in my career, from performing to celebrities, funny experiences on stage and things that weren’t going right until the last moment.

I think the most memorable thing was a friend asking me to perform at his friends 40th birthday party. I arrived at this mansion. Thought nothing of it, went in started doing close up magic. I was noticing the food, nothing fancy, just party pies, sausage rolls, things like that. I did think why this type of food is here at a 40th. Oh well kept performing went up to an elderly couple and performed magic. Got talking to them and found out it was the owner of VILLIES!!!! Absolutely love villies food and was honoured to perform at his daughter’s 40th birthday.

What or who inspired you to become a comedy magician?

When I started magic I wanted to take a more serious approach. I would often whilst performing make a few funny remarks. It got to a point where I was making more jokes then actually being serious. I decided from there to do comedy magic.

What kind of preparation do your performances involve?

Performing magic for me also entails running it as a business. A request will come through and I will need to aks them details regarding what their after and things like that. It involves sending out a contract, taking deposits. Form their its scheduling in the event. For close up or stage shows, I have a set routine which I use. I ensure all the props are in working order. Most important thing is checking the direction to the event…. You never know what might happen along the way.

What type of venues or shows do you usually perform? How big is the audience?

I performed in all types of venues, from living rooms right up to entertainment centres. The audience sizes range from 10 people where the most I have performed for is 800.

About 5 shows a weekend

How has Covid impacted you and your profession?

COVID has made all the shows disappear, which in my opinion isn’t really a good magic trick.

With restrictions easing in certain states, how have the new regulations impacted your future performances such as audience participation?

We are lucky here in South Australia. Most of my shows were for interstate, however here in Adelaide things are slowly returning back to normal.

Has the pandemic provided any inspiration for you?

Yes. For about 8 years I have wanted to learn hypnosis. I wanted to create a hypnosis show and learn hypnotherapy. Over the past few months, I have used this down time to study the wonderful world of hypnosis.

I have also been lucky enough to perform a few online magic shows through zoom which surprisingly have gone well.

What’s been the biggest change for you pre covid vs now?

I have spent a lot more time at home working from doing shows online and studying. With hypnotherapy I plan to run sessions online as well