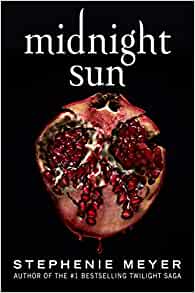 Twelve years ago, I was wrapped in the world of Edward and Bella. I was constantly going between being Team Edward or Team Jacob. And when the Twilight series ended, I was sad. Yep, I was a true twi-hard.

When Stephenie Meyer revealed that she was going to be releasing Midnight Sun, the first story from Edward’s perspective, I was elated. Then she announced that it was on hold indefinitely thanks to someone who leaked the transcript. All we were left with was the first 12 chapters, leaving us wondering if we would ever get to read the rest.

Imagine my surprise when Meyer broke the internet (literally!), announcing that she was in fact releasing Edward’s story after all. Suddenly, 2020 didn’t seem all bad.

It’s clear that after all these years, people are still obsessed with the series. Over one million copies were sold in the first week of release. Getting my hand on one was difficult, but I did.

At 752 pages long (Twilight was just under 500), it was clear that Edward had a lot more going on in his mind. I love how much more Edward and his siblings were fleshed out in this book. We learned a lot more about their backstories in greater detail, and far sooner, than we did through Bella’s eyes. Edward clearly has a lot of demons he is wrestling with which is to be expected having lived over a century on Earth!

Just like the Twilight books, I thoroughly enjoyed Midnight Sun. Although much of the content is the same when he is with Bella, as readers, we gain an insight into what hunting is like for him and learn a lot about his early life as a vampire, which we don’t uncover until later in the Saga. We also learn more about his siblings and how Carlisle ‘saved’ them.

Perhaps the most interesting aspect of the book is the insight we have into Edward's thoughts. While the idea of hearing thoughts is cool in theory, we learn how frustrating it can be in practice. Sure, it allows Edward to find out information he needs but he also hears things he doesn't want to. We also find out exactly how frustrated he is that he can't hear Bella's thoughts.

While a lot of critics have not necessarily been favourable toward the book, I loved it. Sure, it might have been nice to have even more new information, but we need to remember that Meyer couldn’t exactly alter too much of the dialogue or story read in Twilight. The fleshing out of some parts, such as when Bella is attacked by James, were interesting and adding a new element to the story.

Meyer’s writing overall has come far from her Twilight days. Her work is more polished; is not as cliched and her description is far better. Perhaps the new voice gave her an opportunity to explore some new techniques. Whatever the case, it reads more smoothly and isn’t as cringey.

Overall, Midnight Sun is an excellent addition to the Twilight saga. We learn more about Edward and the torment he has faced for many years and we are given the chance to see Bella through a fresh set of eyes. This makes her more likable in my opinion.

As interesting as it would be to read New Moon from Edward’s perspective; Meyer has stated that she feels Midnight Sun is the first and last time we would read Edward’s perspective. Although she has teased two more books in the saga. The big question remains, who will these be from? Many speculate at least one book will come from the perspective of Edward and Bella’s half-mortal daughter Renesmee. Time will tell!

Midnight Sun is a must-read for all twi-hards or anyone who is interested in reading the books for the first time!