The Ballad of Songbirds and Snakes Review 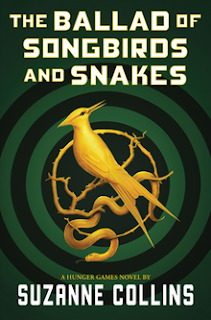 Over a decade ago, I fell in love with a dystopian book series. That series was The Hunger Games by Suzanne Collins. Now, as a woman in her mid-20s, I have fallen in love with the series all over again-thanks to Collins latest release.

The Ballad of Songbirds and Snakes is set way back when Coriolanus Snow (the crazy dictator from the original trilogy) was an 18-year-old mentor in the 10th Hunger Games. It tells the story of Snow's rise from poverty to President of Panem.

This a very different world to what we know from the original series. Panem had been through war just over a decade prior, where the Captiol emerged triumphant. The Hunger Games is quickly losing their viewers, so the Capitol decide to instate mentors who will boost up the contenders and the ratings.

Snow is full of ambition and promise, so the Capitol select him to mentor Lucy Gray Baird from the poor District 12. She is eccentric, conniving yet captivating singer from District 12. It is Snow's job to guide her to the win. He just needs to make sure that he doesn't fall in love with her first.

Like the original series, this novel is action and adventure filled, with plot twists that have you on the edge of your seat. It is also written for a more mature audience, Collins clearly recognizing that the original readers of the trilogy have aged.

There's teenage love; detailed violence that borderlines horrific; names that are difficult to pronounce; and an accentuation of how class can determine ones place in life. We also see into the dark and twisted minds of some of the Capitol members such as Dr Gaul.

While the novel has received mixed reviews from critics, I personally enjoyed it. Although the pacing was a little off at times, overall I was enthralled by the theme of nature vs nurture and Snow's backstory. I found myself being empathetic for Snow. While I originally viewed him as a heartless madman, I've come to realise that he is like that thanks to the Capitol. He had too much heart which turned out to be his biggest downfall.

Collins has created a masterpiece that is enthralling, captivating and just what we needed to get us through this crazy time. The prequel has humanised a character we came to hate in the original books through vivid storytelling.

As yet, there is no word on a sequel but Collins has confirmed she is in talks with Lionsgate to develop a movie. I am excited to see Snow's story come to life on the big screen and look forward to the potential for more Hunger Games books.