It’s a skill that many of us wished we possessed. We watch the tricks in awe, wondering how what we’ve witnessed could even be possible. For Joel Howlett, many years of training has put him where he is today- a world-renowned magician. Because of the nature of this story, I have included a few videos throughout the story demonstrating some of Joel’s remarkable skill.

I meet Joel at his home which he shares with his Fiancée’ Renee. This home, he tells me, belonged to his grandma and he purchased it so that it would continue to stay in his family. Our interview takes place in his back room, where his magician’s backdrop is set-up. As we start our conversation, I don’t know what to expect because magic is so unpredictable.

Joel’s love for magic began from a young age while he was still in primary school. “I got my first magic kit and within a very short space of time I was performing for relatives, at school for 'show and tell'  and then eventually I made a TV appearance", Joel explains.

That TV moment was the 1997 NBN telethon which was followed by an appearance on Hey Hey, It’s Saturday just a few months later. It was the exposure Joel needed to begin a career in magic, performing at children’s parties and Community Events. Joel says, “ I have always relied heavily upon word-of-mouth to keeping up the momentum.”

Joel quickly learnt that, “The first rule of magic is you never give away your secrets. You just need to teach yourself through watching videos and reading books”. Joel explains that there were a few older Magicians in Newcastle and Sydney who were Mentor Figures that helped explain some tricks of the trade to him and guided him with constructive feedback. “They’d come and watch me perform and give me tips on certain things.”

“The kids parties I did in the beginning were a great training ground for me. Young kids are so honest so they’re the best audience”. Joel learned fast what kept an audience entertained and what didn’t.

I tell him how I’ve never been fortunate enough to see a high-quality magic show live before. I’ve certainly seen a lot on TV though. “At some point, you’ve gotta see it live,” Joel responds. “On TV it’s all too easy to say that it was trick photography or that everybody was in on it. When it happens up close and in real life, it’s a wonderful feeling”.

Progressing to Bigger and Better things

As with all arts practices, it’s what goes on behind the scenes that determines the quality of the act. Joel spends hours on each individual trick. He must learn it, perfect it and then make it look effective and seamless. “Sometimes, I’ll work on something for many months, try it out in front of an audience and find it doesn't get the reaction I was hoping for. Even after hours of work and experimenting, I'm not afraid to take something out of my act completely and try something else”.

In 2019, Joel found himself performing in New Zealand, Queensland, Canberra, and all over New South Wales. The majority of his performances are a one-man show he explains. “The shows I do for corporate events are always so appreciated as the audience I'm working for has usually been conferencing all day! By the time I show up they are ready to relax, unwind, have a laugh and be entertained." A great deal of these corporate events and conferences happen at events centres and vineyards around the Hunter Valley.

When he is fortunate enough to play a larger scale show at a theatre or auditorium, he will often bring show girls and make a big spectacle of it.

Joel has won his share of awards. These include The Millennium Dreamers Award from Walt Disney World Florida; The Geniis Magic Society Best Overall Performer in 2013 and 2014; and the 2018 CONDA award for Best Theatrical Event.

Joel looks toward the future

I’m curious to find out how Joel feels about shows such as The Masked Magician where they give the tricks of the trade away. He tells me that it takes away the charm that magic brings. “Even people who are really academic appreciate the puzzle side to the tricks. So if someone just tells you how a magic trick happens, you are usually just disappointed ".

I mention that from my point of view, if everyone knew how these tricks were done, then there wouldn’t be an entertainment factor in magic anymore. "There were magicians who got upset when YouTube started and people were uploading videos explaining tricks,” Joel explains. “But  there have always been magic books available in places like Public Libraries and Book Shops explaining secrets of magic. I don’t think it’s spoilt anything at all”.

So, for now the tricks of the trade are still relatively secret from most of the general public who don't wish to go searching for the answers.

2020 has started off with a bang for Joel, having already performed a show at Cessnock Performing Arts centre. But his most exciting challenge this year will arrive in April when he and his Fiancée become parents for the first time. “I reckon this is probably my best magic trick yet!”

Photos in this article taken by Andrew from AJM 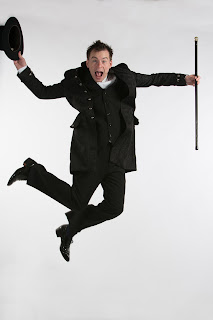