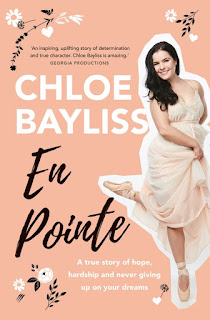 You probably know her for her role as Hayley in Channel Nine's Doctor Doctor, but in her previous life, Chloe was a dancer. She was in her final year at National College of Dance and had just been accepted in an American dance school. But that all came crashing down, thanks to a mysterious illness.

Chloe Bayliss has written her debut book, an autobiography documenting her early years as a dancer, and the moment that would change her life forever. She is honest and raw in her emotional retelling of her life story. Without holding back too much, she takes us on her rollercoaster journey.

Upon first glance, one would think that that this is merely a teenage girls diary they've stumbled upon. Chloe has used past diary entries as well as her own memory to create each and every word of this book. She has poured her heart out onto the page, creating an interesting read from beginning to end.

The first part of the story shows us how hard the life of a dancer can be; the dedication involved; the endless hours of training; the relocating from Port Macquarie to Newcastle to gain better teaching. Chloe never gave up. She had a dream that she was going to pursue, no matter what it cost.

At the peak of her young career, right before she is to perform Swan Lake in her final year and before jetsetting to a company in Washington, she is hit with a life-threatening illness.

When telling her story, she doesn't hold back. Chloe doesn't hide any details, emotions or feelings.

At first, Chloe is diagnosed with a virus that will simply pass. She can't stop vomiting, she suffers nose bleeds and has a splitting headache. Her mum knows something isn't right. Chloe tells of her mum's mad dash to the hospital and how, five days before her big performance, she finds herself in emergency at John Hunter Hospital. What unfolds in the following chapters is horrific. It's hard to believe that someone so young and fit went through what Chloe did.

Chloe documents the following months in all it's glory. After all, this is her life story and there's no point in her holding back. As this is a spoiler free review, I will omit much of what she went through. You need to read the book to fully appreciate the extent of her illness.

Chloe nearly died. She abruptly gave up her dream. She laid in a hospital bed for months, wishing for a diagnosis. Finally, the diagnosis came- Lupus. Though it was a bitter pill for both her and her family to swallow, a diagnosis now meant that Chloe could begin her recovery process.

Throughout the story, Chloe's determination did not waiver. She was determined to succeed at dancing. When she got sick, she was determined to fight the illness and return to dancing. Her passion remained. She teaches us that sometimes in life there are bigger obstacles than we anticipated. These obstacles may stand in our way, but without giving in, we can overcome them.

As a dancer who had to give up her dreams after suffering a back injury, I really resonate with Chloe's story. It isn't easy to lay your life out like this. There's nowhere to hide and evoking your emotions is a hard thing to do. But it's a story that needs to be told. Chloe's story will leave you feeling both inspired and emotional.

In the end, Chloe's story isn't about tragedy nor is it about giving up on your dreams. Instead, it's about rising above it all and finding something that you can do. If it weren't for Chloe's illness, she probably would never have gone into acting. She wouldn't have had this story to tell.

As her final words state "I really hope you can take something away from this book to inspire you to keep on keeping on and have a little hope that sometimes miracles can happen". You just need to have faith in what you do and believe that there is always light at the end of the tunnel.